Richtig Haus is happy to announce the release of Brood X: Erebus and Eden (Book One and Two). 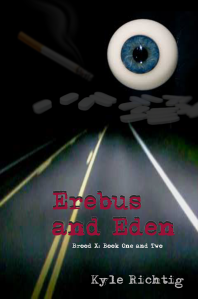 Erebus and Eden: Brood X, Book One and Two

Brood X has been alive inside me for over 17 years. What became Brood X began with the story of Erebus and Eden. The stories that followed were originally to be called Our Brood, signifying both the culpability of culture in creating these characters, as well as the concept that all of us, no matter how disturbed or counter-culture, are all a part of this society. One can not simply “cream” the individuals from the top of society as is done in historical accounts.

The Brood X series was completed in late 1998, yet it has not been able to surface until now. I chose the name Brood X for several reasons. Firstly, the characters in Brood X represent the last years of Generation X. Secondly, because of the length of time it took for me to make this dream into a reality. 17 years is the same interval that the real Brood X (cicadas) take to emerge into the world again.

Editing the text of these stories again has been a treat for me. I created a playlist of music that I listened to in 1997/8 to help me return to those days (including the real mix tape, Bleeding Velvet Skies which appears in the chapbook of the same name). The experience has been like a time machine for myself. I do not doubt it would be the same for those who influenced the characters in the book.

This site uses Akismet to reduce spam. Learn how your comment data is processed.